Agriculture
This loan helps to purchase 6 goats and 7 chickens to resell later.

Mr. Tinsyande is the official of the group called Nandtaabe Silgo. He is the married father of six children. The oldest is 51 years old, and the youngest is 31. None of the children is in school. He has two persons to support.

He has been a farmer for 51 years. He gets his supplies from nearby markets. With the money granted, he intends to purchase six goats and seven chickens for his farm in order to resell later.

He wants to use the profits from the loan to reinvest in his business. His ambition is to become an even bigger livestock farmer and to purchase lots of land for his children

NB: Tinsyandeis a trained tailor and has worked as such. But with our help (Kiva and MicroStart loan), he decided to include other work, such as livestock farming and selling grains (buying and selling in case of shortages). This justifies his many activities. 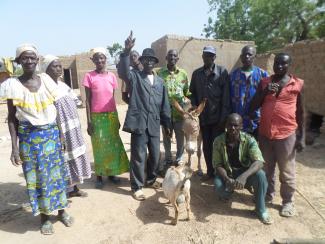